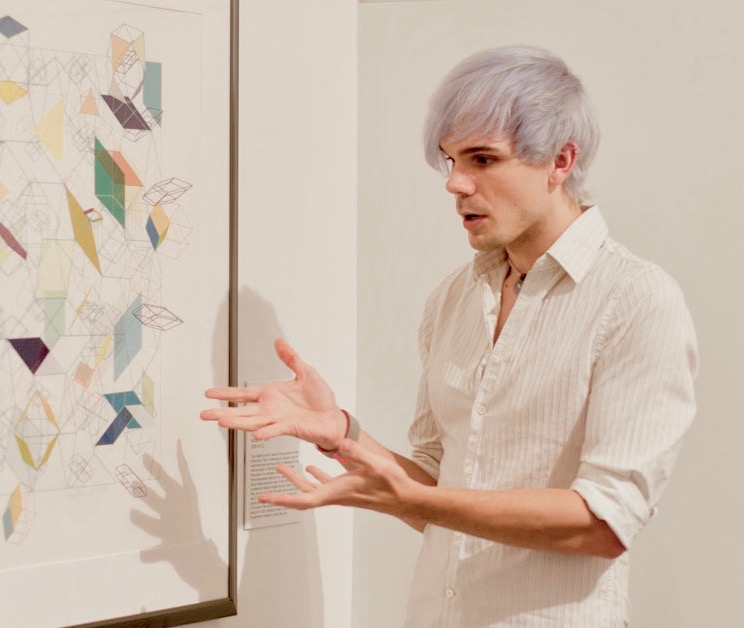 Jordan Alexander Key (b. 1990), blind, gay composer of contemporary and classical music, currently pursues his PhD in composition and musicology at the University of Florida. He earned bachelor’s degrees in music composition, mathematics, and philosophy from The College of Wooster (2013), as well as a master’s degree in music composition from the University of Arizona (2015). His significant recent projects include his Kennedy Center premier of his ballet, "To Say Pi;" his residency at the Harn Museum of Art and the production of music for its various exhibitions including his sextet, "Verses from the Scroll of Sondering," and his Black-MIDI dance, "Nachi No Taki;" his European premier with Vienna’s PHACE Ensemble performing his octet, "Threnody on the Death of Children;" a performance by Boston String Quartet of his "String Quartet No. 1;" a concert with Bold City Contemporary Ensemble performing both his trio, "March for the 12th Hour," and his quintet, "Discursus Anachronismus;" a collaboration with the Vancouver Queer Arts Festival and Calliope’s Call for the premiers of his atheist songs, "God Ourselves" and "Last Night I Touched Him;" and the display of his recent audio-visual projects as part of the Wolfsburg Kunstmuseum’s new exhibit, "Never Ending Stories: The Loop in Art, Film, Architecture, and Music," in Germany. Jordan's interests in early music, bagpipe music, and modern organ repertoire give his music a distinct contrapuntal and harmonic flare that is both rhythmically diverse and melodically compelling.

Octet: Threnody on the Death of Children
0:00
Octet: Threnody on the Death of Children was inspired both by numerous historical pieces on similar subject matter ranging from Renaissance virtuoso keyboardist Jan Pieterszoon Sweelinck’s Mein junges Leben hat ein End, 19th century master of the symphony Gustav Mahler’s Kindertoten Lieder, to Krzysztof Penderecki’s Threnody for the Victims of Hiroshima and by present day events such as the recent Marjory Stoneman Douglas school shootings, the use of child soldiers in conflicts around the world, and the brutal violence wrought against some of the most vulnerable members of society as a by-product of global violence. Octet is intended to be a meditation on life from the perspective of the children living through these situations at the moment of this brutal culmination. I cannot pretend to be able to truly empathize with these people and I cannot claim their struggle as my own, but, as an artist I feel a responsibility to try and to attempt to interpret this in a way that might touch other people. This piece was intended to be disconcerting and even harsh - to use unusual rhythmic, harmonic, and melodic structures to evoke anxiety and hysteria. It pulls musical quotations from modern and historical pieces as well and plays those themes against each other to represent the discourse of history with the present and how our resultant collective actions and inactions have led to these events around the world. It crescendos and decrescendos until a final culmination to juxtapose moments of narrow escape with the inevitable and terrible finale of a young life cut horrifically short.
To Say Pi, Black-MIDI Ballet (fixed media)
0:00
Watch the dance at: https://www.youtube.com/watch?v=poMCrv7hSv4/ To Say Pi was commissioned under the National Science Foundation’s grant-1751989, awarded to Dr. Leslie Lamberson and sponsored by Drexel University. Special thanks to Lucy Bowen McCauley, choreographer of the dance component of this mini ballet.The name of the music comes from a quotation from English essayist, Daniel Tammet, in his book, “Thinking in Numbers.” Tammet writes, “A bell cannot tell time, but it can be moved in just such a way as to say twelve o’clock – similarly, a man cannot calculate infinite numbers, but he can be moved in just such a way as to say pi.” Our ability to say “pi” and have an internal pointer to such an abstract concept, a concept embedded in the infinite and infinitesimal and intrinsic to the fabric of our cosmos, is quite miraculous. While the ratio of a circle’s circumference to its diameter seems rather trivial and a simple calculation, since its proposal over two thousand years ago this abstract ratio has inspired and humbled humanity in its apparent omnipresence and seeming inexpressibility and incommensurability. The remarkable thing about humanity, however, is that we have persisted over the millennia to attempt this ostensibly impossible utterance of profound truth.
Gay Song Cycle: Last Night I Touched Him
0:00
Song cycle in five movements, completed in Spring of 2019, for solo tenor voice and piano on an original gay-themed text. World premier by Wes Hunter in Calliope's Call "Sounds of Unity Concert," November 2019. "Last Night I Touched Him" is a small song cycle of haikus by the composer. The text comments on the struggle of coming out as gay in a conservative society. The haikus not only reflect homosexual love, but also the fear, hate, and anguish that accompany love for many gays who come out in intolerant communities. Along with the emotional and physical portrayal of homosexual love and its struggle for tolerance, is the internal conflict between spirituality and a God that is supposed to be loving, but is frequently shown to be unforgiving and hateful. This piece also explores the structure and feel of haiku in music through short forms that work to juxtapose musically contradictory styles, textures, emotions, and musical references. A play between homosexuality and religion, this piece is drama in miniature form.
Meditation after the Death of Stephen Hawking
0:00
"Meditation after the Death of Stephen Hawking" is a trio for soprano, flute, double bass, and fixed media on digital excerpts from Carl Sagan, Stephen Hawking, Richard Dawkins, Malala Yousafzai, Jane Goodall, and Wangari Maathai. Thank you, Stephen Hawking, for being an inspiration throughout my life, showing me the value of lifelong learning, impassioned teaching, unabashed imagination, and perseverance in the face of adversity. Written for the Fonema Consort