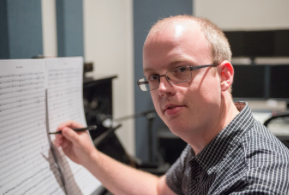 Biography: Chris Ozley is a native of Augusta, Georgia. Recently, he received a Master of Music Composition degree from the University of Texas at Austin where he studied with renowned educators and composers Donald Grantham, Dan Welcher and Russell Pinkston. He holds a Bachelor of Music Education degree from Jacksonville State University where he studied composition with Michael D’Ambrosio.

Chris has written and arranged numerous works across a broad spectrum of media. His recent work "Detour" for wind ensemble was selected as a finalist for the 2013 ASCAP Morton Gould Award. Also, "Detour" was selected as a winner in Region VI for the 2013 SCI/ASCAP Student Commission Competition. Chris garnered a “graduate finalist” distinction for the 2014 SCI/ASCAP Student Commission Competition for his “Concerto for Percussion and Wind Ensemble”—which will receive its premiere in Lamoni, Iowa, in 2015.

Chris' works have been performed by numerous luminary artists including highly regarded pianist and pedagogue Dr. Richard Masters (Virginia Tech) and world-renowned saxophonist, Harvey Pittel. In December of 2014, Chris' music was heard at the Midwest Clinic in Chicago, Illinois, and was performed by the illustrious Canyon Ridge Middle School Honor Band under the direction of Amy Allison. Coinciding with his Midwest premiere, Chris was featured in the December 2014 issue of The Instrumentalist —a national magazine for band and orchestra. He currently resides in Austin, Texas.