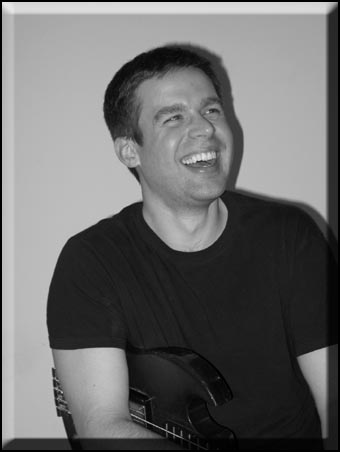 Tadd Russo (b. 1976) currently serves as a staff arranger with the United States Air Force Band in Washington, DC and teaches music technology at Morgan State University in Baltimore, MD. Russo completed his Masters degree in composition from The Ohio State University where his principle instructor was Thomas Wells. In 2000, he served as The OSU School of Music Composer-in-Residence, composing for the OSU Symphony Orchestra. Tadd has worked extensively in theatre and dance, creating scores for plays and for dance productions. He has composed music for the OSU Department of Theatre and Department of Dance, Berea Summer Theater, Grandparents Living Theatre, and Columbus Children's Theatre. His music has been performed at the Edinburgh Fringe Festival, the NOW new music festival (Capital University) at the OCEAn festival (Oberlin Conservatory), the Electrolune Festival in Lunel, France, and at the Contemporary Music Festival (The Ohio State University).

Russo has been commissioned to create works ranging from electro-acoustic to orchestral, including chamber music and music for solo instruments. He has also composed works for solo voice, children’s choir, and SATB choir. Several of his compositions for voice incorporate the writings of American author Edgar Allan Poe. He currently resides in Baltimore, Maryland.

Reading a Wave
0:00
“Reading a Wave” is the title of an essay by Cuban-Italian author Italo Calvino which is part of a larger work entitled Mr. Palomar (after the Palomar Telescope). Like a telescope, Mr. Palomar--the main character in the book--has a unique way of perceiving seemingly common things. In Reading a Wave, Mr. Palomar consumes himself with the task of perceiving all of the different elements of a single wave at once. In my piece, I have not tried to evoke the sound of water as in Debussy's La Mer, but instead have tried to evoke the process of perceiving water as it approaches. As with the wave that Palomar observes in Calvino's story, the texture of this piece constantly pulls between instruments and obscurity until, at last, a frustrated Mr. Palomar walks off along the shore.

Reading a Wave was commissioned by The Ohio State University Orchestra under the direction of Marshall Haddock while Russo was Composer-in-Residence.

Videt Johannes Jesum
0:00
Videt Johannes Jesum was composed for the baptism of Maria Cecilia Bester, second daughter of Matthew and Stefanie Bester. The premiere was performed by the choir of Saint Mark's Episcopal Church, Columbus, Ohio, under the direction of Gary Garber, with organist Michael Murray.

Notes:
A setting of from the Gospel of John when John the Baptist met Jesus.
Translation:
[John] saw Jesus coming toward him, and said, "Behold, the Lamb of God, who takes away the sin of the world!"... And John bore witness, "I saw the Spirit descend as a dove from heaven, and it remained on him. I myself did not know him; but he who sent me to baptize with water said to me, 'He on whom you see the Spirit descend and remain, this is he who baptizes with the Holy Spirit.' And I have seen and have borne witness that this is the Son of God. Alleluia! Amen!

Family Voices
0:00
Family Voices is a suite of music written for a production of two Harold Pinter one-act plays. In the first, Family Voices, a father, mother, and son read letters written to one another, but never sent or received. The three characters are represented by the three lines of counterpoint in the beginning and ending sections of this suite. The middle theme of the suite comes from music written for A Kind of Alaska, which was based on the Oliver Sacks book Awakenings, in which patients are awakened from long-term comatose states through the administration of a new drug. Pinter’s play focuses on a patient’s struggle to comprehend the changes that have passed her by during her thirty-year absence, and the joy and subsequent frustration this provides for her family.

Family Voices and A Kind of Alaska were directed by Carl Skorepa and presented by The Ohio State University Department of Theatre in 1996. The suite, originally scored for string trio, is dedicated in memoriam the composer’s grandfather, Alfio Russo.


At the Zoo
0:00
At the Zoo is a set of three short dances for trumpet and bassoon. The titles come from Mr. Palomar, Italo Calvino's collection of fictional essays in which Mr. Palomar observes the world around him. While the music was written before being titled, the imagery in Calvino's essays significantly matches the moods created in each movement. Musically, each dance explores a different interval: the first movement makes particular use of the major second; major and minor thirds form the building blocks of the second movement; and the final movement utilizes the minor second in an insistent way.

I. The giraffe race
The first stop in Mr. Palomar's visit to the Vincennes zoo is the giraffes' yard. Calvino describes the seemingly uncoordinated movements of the giraffes as they charge the fence, spin around, and dash back again and again before abruptly stopping to rest. Mr. Palomar is transfixed by their movement, because they are at once harmonious and inharmonious.

II. The albino gorilla
In the Barcelona zoo, Mr. Palomar pushes his way to the glass to see Snowflake, the albino gorilla. The gorilla turns to the crowd with a gaze of desolation and patience–a cumbersome presence. In the white beast's motionless immensity, Mr. Palomar senses the antiquity of pyramids and mountains.

III. The order squamata
In the reptile house of the Paris zoo, Mr. Palomar observes the Iguanas. These cumbersome lizards are covered with a skin woven from tiny speckled scales and complemented with crests of spikes. The lizards continuously shift position with agile motions of elbows and knees. As Mr. Palomar moves through the reptile house he notices that scales and quills seem to be passed from one display to the other in a random fashion–as if the species are constantly being shaped and reshaped.

Premiere Info:
At the Zoo was premiered at West Liberty University, West Virginia in 2007 by Tama Kott, bassoon, and Matthew Inkster, trumpet. It has been selected for performance at the 2009 International Double Reed Society conference in Birmingham, England.