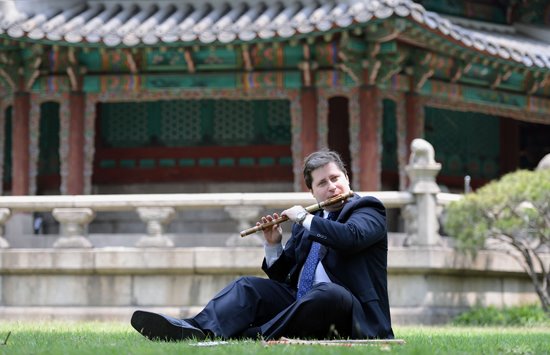 MICHAEL SIDNEY TIMPSON (Korean: 손마익; Chinese: 麥可 汀普森) is an Associate Professor of Music Composition at at Ewha Womans University in Seoul, Korea. He was a Senior Fulbright Research Scholar in the Humanities in Taipei, Taiwan in 2009 for research on his forthcoming book on orchestration and compositional philosophy on Chinese instruments for western composers (for which he has already published two articles.) He has also been on the music composition and electronic music faculty at the University of South Florida, Rhodes College and the University of Kansas. A student of Samuel Adler, William Albright, William Bolcom, Donald Crockett, Morten Lauridsen, Frederick Lesemann, Andrew Mead, and Joseph Schwantner, he earned his undergraduate composition degree at the University of Southern California, his master’s at the Eastman School of Music, and a doctorate from the University of Michigan. His musical beginnings were borne out of playing baritone saxophone and “electric” bass clarinet with a strong interest in American improvisational forms, especially Free Jazz and Fusion; this would later evolve into incorporations American popular genres, such as Funk, Hip-Hop, and Alternative Techno. A child of the multicultural era in Northern California, he was intrigued with East and Southeast Asian traditional musics, these seeds that would eventually bear a lasting impact on his musical style. With his research on Chinese instruments, he has also become an improviser on various Asian woodwinds. A composer in virtually every medium, many of his recent compositions are for percussion ensemble and for orchestra; he has also composed many works for Chinese and Korean instruments. A winner of multiple composition awards, recorded on major labels, and with significant publications, his works continue to be featured throughout North and South America, Europe, and Asia. Timpson won the ASCAP Grant for Young Composers, the BMI Student Composers Award, the DownBeat Magazine award for extended composition, and was twice nominated for the American Academy of Arts and Letters composition award. He also won the Brian M. Israel Prize (The Society for New Music and the New York Federation of Music Clubs), the Lee Ettelson Composer’s Award, National Federation of Music Club’s Youse compeition, second places at the Music From China International Competition and in NACUSA’s composition competition, very highly commended in England’s Kathryn Thomas Flute Competition, and honorable mention at the National Federation of Music Club’s Beyer competition. His orchestral works have received performances and recording by the Kiev Philharmonic, the Czech Philharmonic, the Florida Orchestra, the Jacksonville Symphony, the Singapore Chinese Orchestra, and the National Orchestra of Korea. In 2009, he released, “Cross-Cultural Collisions, Reinventions, and Fertilizations”, the last solo composer CD produced by Capstone Records, which has received several outstanding reviews. His compositions appear on the Capstone, NACUSA, and ERM/Naxos recording labels, and are published by HoneyRock and American Composers Editions. Since his works appear on over 14 professional CD releases, Timpson’s works continually appear on radio shows throughout the U.S., Asia, and Europe.