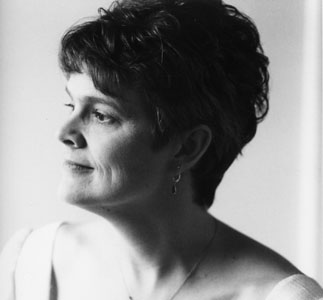 Leslie A. Hogan (b. 1964) studied composition at the University of Kansas, the University of Michigan, the Sandpoint Festival, the Atlantic Center for the Arts, and the Bloch Composers' Symposium. She worked principally with Leslie Bassett and William Albright. Her music increasingly reflects a longtime fascination with other art forms and with the potential of music to reflect or respond to visual stimuli from the natural world, resulting in works such as Flight (1997), String Quartet #3: Dolphin (1996), Sonata for alto saxophone and piano: 'Thoughts that fit like air' (2000), and Praise (1992), an orchestral work based on some poetry of Robert Hass. Other works include Sonata for violoncello and piano (2002), written for Virginia Kron, Questions of Travel (2003), a setting of the Elizabeth Bishop poem for mezzo-soprano and large chamber ensemble, and Splinter of Hope (2004) and Matisse (2005) for solo cello. Most recently, she has completed Graffiti (2008), for clarinet, violin, cello and percussion, the first segment in a large-scale collaboration with choreographer Valerie Huston, and a setting of Hopkins' "The Windhover" for the 45th Anniversary Season of the San Antonio Choral Society.

In 1999, she co-founded Current Sounds, a new music consortium based in Santa Barbara, California, and also serves on the board of the Chamber Music Society of Santa Barbara, an organization which promotes the performance and appreciation of chamber music repertory through sponsoring workshops, concerts, and outreach activities. She has received awards from the American Academy of Arts and Letters (Charles Ives Fellowship, 2002; Charles Ives Scholarship, 1993), the American Music Center, ASCAP, and the Chicago Civic Orchestra, among others. Dr. Hogan has taught composition in the College of Creative Studies at the University of California-Santa Barbara since 1995.