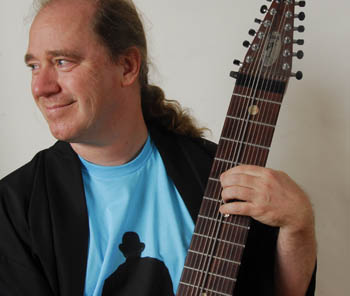 Larry Tuttle writes propulsive and optimistic music with a strong sense of story and narrative arc. He works in a contemporary orchestral idiom while still taking full advantage of traditional musical values such as strong melody, meaningful structure and thematic development. Larry won the Pittsburgh Symphony’s 2014 H.J. Heinz Company Audience of the Future Composition Competition with his first orchestral work, CHORALE AND FIDDLE TUNE. The competition was judged by students from the greater Pittsburgh area. His piece BY STEAM OR BY DREAM won second prize in the 2016 Keuris Composers Competition, in the category of Youth Symphony Orchestra. Both contest wins serve to emphasize Larry's commitment to creating challenging but accessible music for young players, and for re-vitalizing the audience for orchestral music.

BACKGROUND --- Trained extensively in double bass and piano from an early age, Larry’s youth growing up in Seattle was saturated with orchestral music. Youth symphonies, All-City orchestras, music camps (including a transformative summer spent at the National Music Camp in Interlochen, where he played principal bass in the World Youth Symphony Orchestra), you name it. Larry’s bass mentors included Ron Simon, James Harnett, Oscar Zimmerman and jazz legend Gary Peacock, who opened Larry’s eyes and ears with some amazing lessons in ear training and the scientific underpinnings of music. An obsession with the bass guitar and a long detour through rock and pop music (including two albums released on Warner Brothers Records with the rock group RUSSIA) eventually led Larry to an eclectic instrument called the Chapman Stick, and a pop-classical hybrid group called FREEWAY PHILHARMONIC. Made up of viola, classical guitar, Chapman Stick and drums, FREEWAY PHILHARMONIC mixed twentieth century classical styles with rock, pop and filmscore ideas, all unified by an intricate and complex arranging style. FREEWAY PHILHARMONIC released four CDs, and its later iteration, STRING PLANET, released two. Larry’s disc of solo compositions for the Chapman Stick, THROUGH THE GATES, is considered one of the landmark recordings for that instrument. Larry and his partner violist Novi Novog now perform as STRING PLANET. Turning his attentions to concert music, Larry found success with his first orchestral work, the aforementioned winner of the Pittsburgh Symphony contest. Among other projects, he is currently developing a new violin concerto and several works targeted for Youth Orchestra. He is a composing and performing member of CELA (Composers Ensemble of Los Angeles). CELA is a twelve-member composer’s collective dedicated to developing and promoting new work.

Chorale and Fiddle Tune (excerpt) - Pittsburgh Symphony
0:00
This is an excerpt from the Pittsburgh Symphony's performance of CHORALE AND FIDDLE TUNE at their Audience of the Future concert from April of 2014. Associate conductor Fawzi Haimor conducting. The piece was the winner of the Audience of the Future Composition Competition. It was selected by a panel of high school students from the greater Pittsburgh area.
By Steam or By Dream
0:00
By Steam or By Dream is an in-your-face wakeup call of a concert overture. It is equal parts Beethoven scherzo, rock shuffle and jig. The piece features three melodies, which compete and interact - a bright major-key melody, a floating chorale, and an aggressive brass gesture. This performance is by the San Fernando Valley Symphony under James Domine, from May of 2017.
The Information Age
0:00
THE INFORMATION AGE is the first movement of the orchestral suite TALES OF SCIENCE AND MAGIC. It is also used as a stand-along concert overture. It has three sections - opening with a busy invention, proceeding on to a pastoral center section, and closing with a jubilant recap which combines elements of both preceding sections. This performance is from the San Fernando Valley Symphony under conductor James Domine, from May of 2017 at the Thousand Oaks Civic Arts Center.
Dragon's Egg
0:00
DRAGON'S EGG is an epic fantasy for orchestra, actually an orchestral story. It has not yet had it's orchestral premiere, so the audio you hear is a reduced orchestration, taken from rehearsal recordings of my composers workshop group, CELA (Composers Ensemble of Los Angeles). CELA is a twelve-member one-on-a-part chamber group that develops the music of its composer/player members. DRAGON'S EGG tells the life story of a dragon in seven parts - Dragon's Egg, Both a Serpent and a Bird, Learning to Fly, Flame-Fight, Ancient Magic, Awaken and The Dragon King.