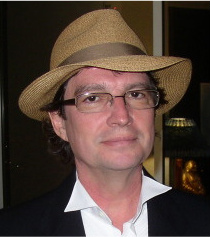 John's music, like a fine blended whisky, is a complex blend with hints of Fernyhough, Ives, Messiaen, and Baudino. Yet it retains that unmistakable Carolloian essence and is thoroughly original. This music is exciting, challenging, and fresh. A must hear. Three thumbs up! ~Robert Wehrman~

John was born in Torino, Italy and brought to the U.S. by his adoptive parents. When he was in grade school, studying classical piano and singing in the church choir, his musical friends were listening to English folk-rock music, mostly Fairport Convention and The Pentangle. Moving from Oil City, Pennsylvania to San Diego, California, he attended college, taking courses in music and psychology. During this time, John took piano lessons and began composing his first piano works. He graduated from San Diego State University with a Masters Degree in Psychology. Shortly after, he moved to Honolulu, began a full-time mental health career for the State of Hawaii and began taking private composition lessons with Dr. Robert Wehrman. John's first composition under Bob's tutelage was a piano suite in six parts. Following this effort, Robert encouraged John to compose an atonal work entitled Frenetic Unfoldings for Solo Violin. After completing this large work, John focused his energies on compositions which incorporated various instrumentation.

Music should express the drama of life. It seldom repeats. It is not always beautiful, nor is it always tragic, but filled with various splendid delights. All we need to do is be attentive.

Frenetic Unfoldings for Solo Violin
0:00
Begun in March of 1998, this work is dedicated to Darel Stark, associate principal violinist for the Honolulu Symphony. This is my first atonal work and my first composition for solo violin. Darel premiered this work at the Lutheran Church of Honolulu on February 12, 2000 and recorded it at the Lutheran Church of Honolulu on July 20, 2000.
The Path is Ambiguous
0:00
Part of a series of 18 piano preludes composed between 2000 and 2001. Pianist Thomas Yee, from Newfoundland, Canada, who has won First Prizes in over 20 national and international competitions, plays a Bosendorfer piano. Thomas is currently an assistant Professor of Piano at the University of Hawaii at Manoa. Recorded at KHPR studios in Honolulu on 10/4/03.
Metamorphosis No. 2 for Solo Viola
0:00
Violist LJOVA Zhurbin, who performs on "Metamorphosis No. 2 for Solo Viola" (2001), was born in 1978 in Moscow, Russia, and moved to New York with his parents in 1990. He divides his time between performing as a violist in diverse groups ranging from string quartets to jazz combos and gypsy bands, studying and arranging world music for the likes of Yo-Yo Ma and the Kronos Quartet, and composing original music for film, TV, theatre and the concert stage.