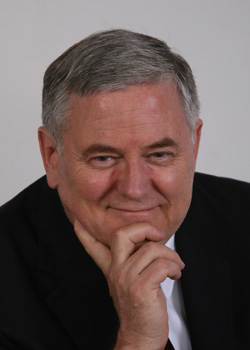 Hubert S. Howe, Jr. was born in Portland, Oregon and grew up in Los Angeles, California, where he began his musical studies as an oboist. He was educated at Princeton University , where he studied with J. K. Randall, Godfrey Winham and Milton Babbitt, and from which he received the A.B., M.F.A. and Ph.D. degrees. He was one of the first researchers in computer music, and became Professor of Music and Director of the Electronic Music studios at Queens College of the City University of New York. He also taught at the Juilliard School from 1974 through 1994. In 1988-89 he held the Endowed Chair in Music at the University of Alabama in Tuscaloosa. From 1989 to 1998 and 2000 to 2001 he was Director of the Aaron Copland School of Music at Queens College.

In 1994, he was the composer-in-residence of the Third Annual Florida Electroacoustic Music Festival at the University of Florida in Gainesville, and he has appeared at most of these festivals in subsequent years. Recent performances have also taken place at the Electronic Music Midwest Festivals, at the Eighth and Ninth Biennial Symposium on Arts and Technology at Connecticut College, at the Society of Composers, Inc. National Conference, at the 2003 International Computer Music Conference in Singapore, and at the 26th Annual New Music and Art Festival at Bowling Green State University.

His music has been recorded on Opus One, Capstone Records, and Ravello Records.