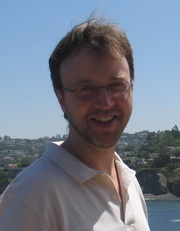 Douglas Geers is a composer who works extensively with technology in composition, performance, and multimedia collaborations. Mr. Geers' music has been performed worldwide, on concerts in North and South America, England, Ireland, Scotland, Norway, Sweden, Denmark, Finland, France, Germany, Spain, Switzerland, Austria, Italy, Slovenia, Croatia, Greece, Romania, Singapore, Hong Kong, Korea, China, Australia, as well as TV, radio, and the Internet. His multimedia theater work, Inanna, was premiered in Zürich, Switzerland in September 2009. Other recent works include an opera, Calling, premiered in New York City in fall, 2008; a work for laptop orchestra, Sweep, premiered in Chicago in 2008; a violin concerto, Laugh Perfumes, premiered in Slovenia in fall 2006. Geers has won numerous grants and awards, including a 2009 Bush Foundation Fellowship Finalist award, a 2008 Argossy commission award, 2007 McKnight Composer Fellowship, Jerome Foundation Composers Commissioning Project prizes in both 2007 and 2001, and others. He studied via scholarships at Xavier University (B.A. in English and Music), the Cincinnati College-Conservatory of Music (Master of Music), and Columbia University (D.M.A., 2002). In 2003 Geers founded the Spark Festival of Electronic Music and Arts, which he directed annually through 2009. In September, 2009, Geers joined the faculty of the Conservatory of Music at Brooklyn College of the City University of New York, where he is an Associate Professor of Music and Director of the Center for Computer Music (www.bc-ccm.org). Please see Geers's personal website for more information: www.dgeers.com.

Ripples
0:00
See www.music.columbia.edu/~geersde/ripples.html for details on the composition of this work. Ripples is a computer tape piece that employs multiple voices in gestures of rising and falling rhythmic energy. As the piece progresses the speeds of the voices increase, exploring the boundries between listeners' perceptions of line vs. texture. Ripples was written at the Columbia University Computer Music Center, New York City, U.S.A., in May, 1997.
Enkidu
0:00
Enkidu is a work for violin with live interactive computer music. In performance, a small microphone is attached to the violin, and the audio signal from this feeds into a computer running software created by the composer in the Max/MSP environment. This software listens to the violin and alters its sound based on preprogrammed algorithms and realtime manipulation. Enkidu was written for and played here by Maja Cerar. See www.majacerar.com for more information on Maja. The piece Enkidu is an excerpt of the large multimedia theatrical work, entitled Gilgamesh. Please see www.gilga.org for more information on this piece. Score available upon request.
Memory Dust
0:00
Memory Dust is an 8-9 minute piece for jazz big band and live electroacoustic music, written for Dean Sorenson and the University of Minnesota jazz ensemble. It was premiered in a series of performances at the Barker Dance Center in Minneapolis, Minnesota on April 3-5, 2003 as part of the festival "Minnesota Jazz: Not Just the Same Old Song and Dance" and was performed again by the same players on May 5, 2003 at Ted Mann Hall in Minneapolis. This recording a live take from a May 5, 2003 performance by Dean and the U. Minnesota ensemble. The work features juxtaposition of two three dimensional harmonic matrices: One using five-note chords generally reminiscent of jazz harmonies, and the other using spectrally-dervied twenty-eight note harmonies. In the case of the latter harmonies, the computer synthesizes these live during performance. The thematic material of the work similarly juxtaposes jazz-like sounds with other textures. While nearly completely written-out, the piece also allows for some improvisation and has a group improvisation, with computer, near its conclusion. Score available upon request.
Reality House
0:00
Reality House is a single-movement chamber music work (ca. sixteen minutes) scored for flute/piccolo, B-flat clarinet/bass clarinet, trombone, violin, viola, cello, and double bass. The title of the work is taken from the name of a methadone clinic/homeless shelter located on 125th Street, Manhattan, a few blocks from my apartment. Musically, the piece explores waves and shifts of energy, mixing consistency and progression with incongruous intrusions and mutations. The recording excerpted here is from the premiere performance of Reality House, played by Ensemble Fa at Miller Theatre, New York City, on December 9, 1998. If you would like to know more about the methods used to compose this piece, please see www.music.columbia.edu/~geersde/audio/reality_house_analysis.html . Score available upon request.