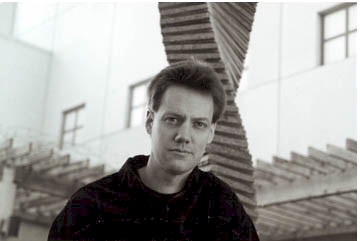 For more information and audio files of my work, go to http://www.davidheuser.com.

David Heuser began composing almost immediately after his first piano lessons at the age of seven, writing short tunes in imitation of the exercises he was studying. He continued to write music throughout his childhood, some for piano, chorus, and wind ensemble, and some for the rock bands he was in. After high school, he attended the Eastman School of Music and then the Indiana University School of Music, where he received his doctorate degree in music composition in 1995. A native of New Jersey, Heuser is the Associate Dean at the Crane School of Music in Potsdam, New York. Prior to this, he resided in San Antonio, Texas for fourteen years teaching at the University of Texas at San Antonio.

Heuser is a storyteller, crafting emotional journeys for listeners, but his stories go beyond words to things only music can speak to. His over 70 compositions range from exuberant orchestral works to intimate chamber pieces. His most characteristic works are rhythmically active, strongly melodic, and often deal with extremes of tempo, dynamics and register. Just as a painter fills space, a composer fills time, and it is Heuser’s goal to lead the listener through the time his music occupies in a way that is compelling and moving.

Heuser's music has been performed by various groups and individuals and on festivals and conferences throughout the United States and abroad. He has received commissions from such ensembles as the San Antonio Symphony, the New York Youth Symphony, the SOLI Chamber Ensemble, and the Texas Music Festival Orchestra. Heuser has won the 2007 Columbia Orchestra American Composer Competition, the 2006 Fauxharmonic Orchestra Composition Contest, two American Music Center CAP grants, a grant from the Artist Foundation of San Antonio, and the 2008 Dallas Wind Symphony Brass Fanfare Competition.

Heuser’s music is published by Non Sequitur Music, and works of his can be found on recordings on the Albany Records (Cauldron), Capstone (Still Life With Fruit), and Equilibrium (Deep Blue Spiral) labels. Heuser is a founding member of the Composers Alliance of San Antoino (CASA), and his work White Towns can be found on that group's first CD "Works by San Antonio Composers Performed by San Antonio Performers"

"...(a) zany, anarchic, sometimes puerile (but what the heck?) confection...A Brief History of Root Vegetables seems well positioned to become a funnier, bawdier, hipper alternative to Gilbert and Sullivan as a large-cast showcase for the voice divisions of music schools around the country. It might be a little too funny, bawdy and hip for most mainstream opera companies, but that’s their loss." - Mike Greenberg, former senior critic at the San Antonio Express-News, on incidentlight.com reviewing the comic opera A Brief History of Root Vegetables (March 2010)

“...thoughtful, beautiful and wonderfully made. As is often the case with Heuser, the music tells a story that has the epic reach of myth.” – Mike Greenberg, San Antonio Express-News reviewing Catching Updrafts (May 2007)

“...a jazzy, nervous, high-energy piece in which the solo line is beautifully integrated with the electronics. It would make a great ballet score.” – Mike Greenberg, San Antonio Express-News reviewing Deep Blue Spiral (November 2006)

“...A Screaming Comes Across the Sky was a shot-in-the-arm beginning...This was all-American music at its most dynamic and visceral...The music continually engaged mind and body as it careened along.” – Charles Ward, Houston Chronicle (July 2005)

“Though this music is not particularly spare, it is concise in the sense that every gesture seems guided by a consistent purpose.” – Mike Greenberg, San Antonio Express-News reviewing November Sonata (November 2005)

“Making the strongest impact was the premiere of David Heuser’s O The White Towns... His setting is fully engaged with the sweep of history and the personal stakes in the poem.” – Mike Greenberg, San Antonio Express-News (November 2004)

“All are exceptionally well-crafted, and all contain a lot more music than the term ‘miniature’ might suggest.” – Mike Greenberg, San Antonio Express-News reviewing Twelve Miniatures for Piano (February 2001)