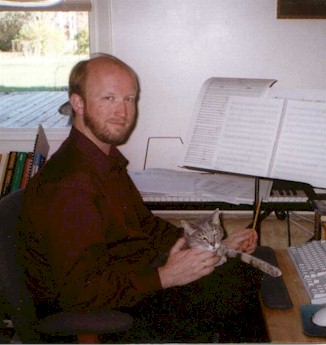 Daniel Powers is a member of the Terre Haute Symphony Orchestra, in which he is composer-in-residence, assistant principal viola, and librarian. He is also a section violist in the Columbus Indiana Philharmonic Orchestra, and does freelance work when he can get it. He also performs as a violinist, frequently in chamber recitals with his wife, pianist Martha Krasnican.

He has composed orchestra works, including two symphonies and a piano concerto, chamber works and several songs. In 2003, his setting of Whitman�s O You Whom I Often And Silently Come (which was premiered in 2002 at the SCI Region VII conference in Flagstaff) won the Ned Rorem Award for Song Composition.

He is also a noted arranger, with a large catalog of Christmas Music, Irish Songs, and Americana, which have been performed by major and minor orchestras across the US and abroad.

Lately he�s been getting into electronic music again.

Even though he�s done it several times, he still finds it vaguely unsettling to write about himself in the third person.