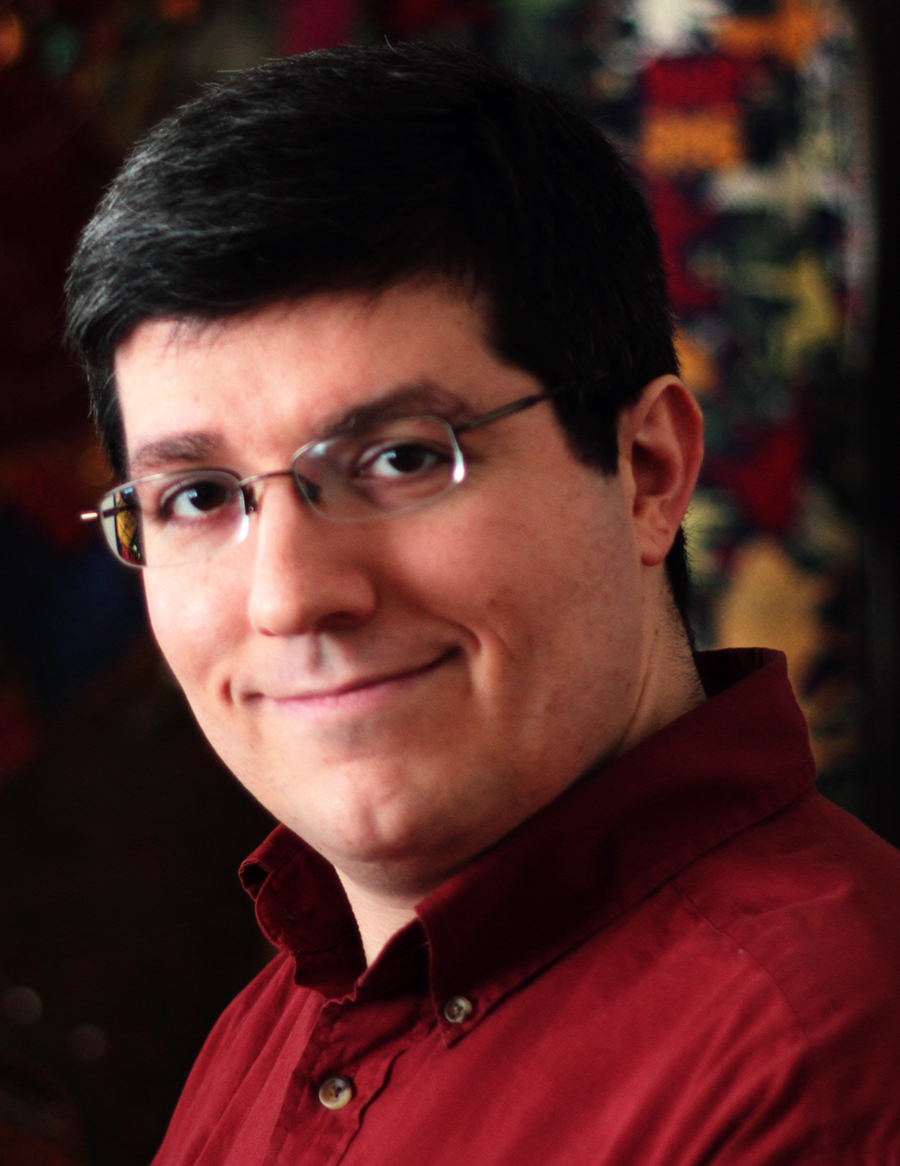 Composer Daniel Eichenbaum’s (b. 1977) music has been performed and published throughout the United States, Europe, and Asia. His Sinfonietta, for wind ensemble augmented with string quartet, is a ground-breaking work premiered by the University of Missouri-Kansas City's Wind Symphony under the direction of Steven Davis. Other recent works include Orbit, for flute, clarinet, and live electronics commissioned and premiered by the Kansas City Electronic Music and Arts Alliance. He currently serves as Assistant Professor of Music Theory at Fairmont State University in Fairmont, West Virginia. In 2013, Dr. Eichenbaum premiered Green Hills of Magic, for narrator and wind ensemble, and Caveat of the Cave, for wind ensemble and choir, in honor of West Virginia’s sesquicentennial anniversary. Dr. Eichenbaum combines his love of music and science as curator and composer for the interdisciplinary performance group, Dark Matter. Dark Matter performs live, electroacoustic music in a planetarium combining performance art and science education into a single, unified experience. Dark Matter has already won grants from the Arts Council of Metropolitan Kansas City and the Charlotte Street Foundation in association with the Spencer Museum of Art and the Andy Warhol Foundation. More information about Dark Matter is available at www.darkmatterkc.com

You may also be interested in Dark Matter: http://www.darkmatterkc.com

Sinfonietta
0:00
A small consort of strings joins a full-sized wind ensemble in Sinfonietta. Although it is not a concerto, Sinfonietta flips the classical notion of an orchestra on its head. Whereas the Classical orchestra represented a string ensemble with wind and brass coloration, Sinfonietta takes a full wind ensemble and adds strings for coloration, blending and melding the string timbre with the wind ensemble medium. As this work is not a concerto, balancing the relatively weak quartet of strings with the full wind ensemble creates challenges, which Sinfonietta addresses in four ways. It uses the strings as individual and string tutti soloists with sparse accompaniment. It creates windows inside heavy textures to allow the strings to appear. It doubles the strings with instruments of similar timbre to add strength in fuller tutti sections. Finally, it uses the disparity of acoustical power between the strings and full wind ensemble to create dramatic tension. Sinfonietta relies upon American folk music as a point of departure along with the unique sound combinations available with this instrumentation. The pentatonic melodies, open harmonic intervals, and regular phrase structure serve as building blocks for the music. The sound of the human voice, integral to the singing of folk tunes, is embraced in the ornamentation of the solo lines. Along with this mimicry is a moment of actual singing by members of the ensemble. Since wind players, brass players, and vocalists all require a breath to make their music, Sinfonietta also celebrates the sound of the human breath. Written into the score are instructions for the whole ensemble to breathe audibly together. This airy, musical sound is integral to both the sound of the human voice as well as the sound of a pipe organ, the timbre of which is emulated at the piece's final climax.
Gagarin
0:00
Home Biography Works Blog Contact West Fork Music Festival Dark Matter Site content and design layout ©copyright 2013 by Daniel Eichenbaum. All Rights Reserved. Works Large Ensemble Chamber Vocal Electroacoustic Electroacoustic The Lonely Road for clarinet and MAX/MSP live processing (2012) Cheryl Melfi, clarinet MP3 I shall be telling this with a sigh: Take me home, the place two roads diverged. Take me home, somewhere ages and ages hence. Take me home, the one less traveled by. Take me home, the place that has made all the difference. -Paraphrased by the composer from John Denver and Robert Frost Gagarin for clarinet and fixed media (2011) Cheryl Melfi, clarinet MP3 Yuri Gagarin uniquely represents a nexus of space exploration and music. While most people know that Gagarin was the first person to orbit the Earth in 1961, most people do not know that Gagarin was also the first person to broadcast a live, musical performance from space. While in orbit, Gagarin sang and broadcast the Shostakovich song "The Homeland Hears" (Rodina Slushit) to Earth and was also joined in his singing by members of the Russian ground crew. In my piece, Gagarin, I very roughly paraphrase part of the Shostakovich melody. The "clicks" in the electronic part are actual samples I recorded of switches and dials from an old Moog synthesizer. The rest of the electronic part uses sine waves, square waves, and filtered noise in homage to the electronic music technology of the time period in which Gagarin made his flight. Written for and premiered at the inaugural performance of Dark Matter, February 4, 2011 at the Gottlieb Planetarium in Kansas City, Missouri.
Orbit
0:00
American astronaut Joseph Allen wrote the following of his orbital experience above planet Earth: We orbit and float in our space gondola and watch the oceans and islands and green hills of the continent pass by at five miles per second. We move silently and effortlessly past the ground. I want to say “over the ground” as I write this, but remember that in space your sense of up or down is completely gone and my description must reflect this fact. In addition, the breathtaking speed of the ship is an odd and confusing contrast to the feel of perpetually floating within the spaceship. You do not sit before the window to view the passing scene, but rather you float there and look out on the scene, certainly not down upon it. Are you speeding past oceans and continents, or are you just hovering and watching them move beside you? All the electronic sounds in Orbit were created using samples from Rebecca Ashe and Cheryl Melfi.