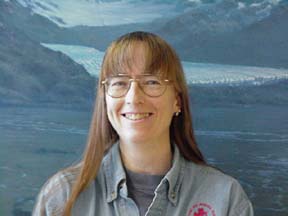 A cassette of her works was released on April 1, 1994. Corliss has had several compositions premiered by the University of Alaska, Anchorage Percussion Ensemble. She was one of six composers asked by Dr. Suzanne Summerville of the Fairbanks Choral Society to participate in the creation of A Mass For Winter Solstice, premiered in Fairbanks, Alaska December 1991 and later broadcast on statewide Alaska Public Radio and National Public Radio. Another work commissioned by Dr. Summerville, Voyage of the Rurik for mezzo soprano and chamber orchestra, based on poetry by Adelbert von Chamisso, was premiered in Fairbanks on Oct 4, 1992 and later performed at MusicAlaskaWomen, an international women's music festival held in Fairbanks in August 1993. Her orchestral work Kodiak Suite, was premiered as a work-in-progess at the Fairbanks Summer Arts Festival on August 9, 1991. The completed four movement work was premiered in Kodiak, Alaska as part of the Kodiak Bicentennial Celebration on Sept 26, 1992 by the world renowned Arctic Chamber Orchestra--the touring group of the Fairbanks Symphony Orchestra. Her orchestral work Denali, commissioned by the Fairbanks Youth Orchestra, was premiered by the orchestra in May, 1995. It was later performed by the Hewlett-Packard Symphony Orchestra in November 2000 and the Kona Symphony Orchestra in 2001. She enjoys arranging and performing familiar classical works for small ensembles and giving them a comedic twist, such as Flight of the Bumblebees for soprano sax, xylophone and piano, The William Tell Key Change Overture and Polka, The Phantom of Seville and La Gazza Ladra Cha Cha Cha for soprano sax, xylophone, piano and percussion.