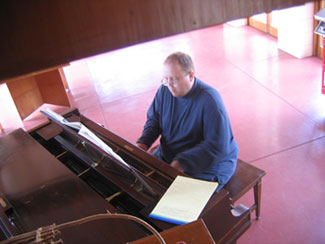 Christopher Wicks at the piano.

Christopher Wicks has been blessed by many performances of compositions of his, but some notable ones include his "Seven Songs on Poems of Therese of Lisieux" at the 2012 New Voices Festival at Catholic University of America, his chamber piece "Exchanges Cordial and Choleric" at the State Theater in Darmstadt, Germany in April 2012, and his setting of Dehmel's poem "Verklaerte Nacht," sung at the Contemporary Music Festival at Sam Houston State University in Texas in March 2011. Christopher holds a MM in composition from the University of Montreal, as well as a BA in Music from Marylhurst College near Portland, although he did most of the work for that degree at the Eastman School of Music in Rochester, New York. He is also a Fellow of the American Guild of Organists.

Christopher says: "While I am grateful to my academic training in various rule-bound methods of composition, such as eighteenth-century common practice tonality, sixteenth-century counterpoint, atonal twelve-tone techniques and Hindemith's play of the tones, I have arrived through much trial and error and striving at a style which incorporates elements of these without adhering to any entirely, and which I believe that I may call truly my own. I am also grateful to my performance instructors (in organ, piano, voice and violin, in descending order of my proficiency) for their role in giving me a sense of what is idiomatic for these various instruments, and for the opportunity to perform my own music with them."

"Sonata for Cello and Piano, mvt. 3"
0:00
This is a variation rondo, with the spirit of a warped gigue, rampaging through the cello of Daniel Saenz and his collaborative pianist Brendan Kinsella. Performed at the Soundscape Festival in Maccagna, Italy in July 2011.