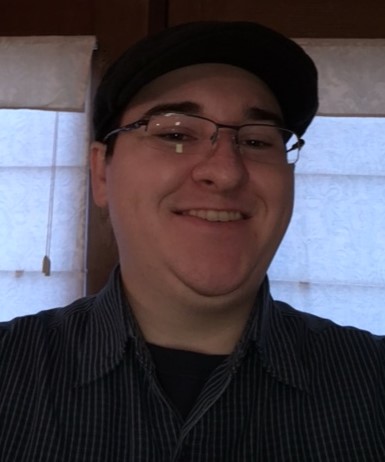 Christopher Adkins is a composer of contemporary art music from Kentucky, with a Bachelor's degree in composition from Northern Kentucky University. As a versatile musician: pianist, vocalist, and conductor, he currently serves as the Music Minister of Licking Valley Baptist Church in Alexandria, KY.

Christopher has long loved music and the composition thereof, especially that of the traditional folk music of Kentucky and the Hymnody of the church which is common to his region. In his own work, he seeks to represent that simple and reflective character, elevating the mundane, while also exploring new sounds and musical possibilities.

Vision
0:00
Vocalist- Katelyn Tesla- Vision, a poem by famous Kentucky-born poet Robert Penn Warren, is a tale of a solitary wanderer’s overnight stay in a secluded riverside glade. The wanderer starts out with much confident ambition to carve a home for himself out of the wilderness, but a nightly vision of death represented by the “owl, white and stark” causes a complete change in the wanderer’s intentions. Just as set as he was to build his house in this place, so now, as the morning sun rises, he is determined to burn his newfound home to the ground and leave nothing behind but smoke and ashes. A strong undercurrent of naturalist idealism, that of man giving back and not taking too much from nature, would be characteristic of Robert Penn Warren’s subject matter; much of his work reflects upon simple country living and the natural world. The music seeks only to heighten the audience’s awareness to the drama portrayed by this powerful text, while a simple folk-like melody hints at the humble, yet profound, Kentucky woodlands origin of both the poem and the poet.
Leviathan
0:00
Leviathan is an electronic piece utilizing the technique of looping, with inserted tracks and sound bits that are representing either the voice of God, various sound effects portraying the action of the text, or actual looped music. The text for this piece is The Bible, the book of Job, chapter 41. After assuming an arrogant posture regarding his own self-righteousness, Job is questioned heavily by omniscient God, in order to teach him, and us, that while we may be allowed to suffer horrible circumstances, The Lord God is still in control of the universe that He created, and that He alone is righteous enough to judge. In this section, unlike any other in the Bible, God Himself brags upon one of His creatures, the Leviathan. The sheer power, ferocity and fantastical splendor of this mortal creation is brought to light as God uses the Leviathan as an example to teach Job and the rest of us just how immeasurably great He Himself really is. Many have wondered at the actual identity of the Leviathan; some have speculated that it was a crocodile or a whale. However, when we examine the text and the features of these existing animals, we find that some things just don’t add up. Since God doesn’t lie, we must assume either He is using metaphors that would have been more relevant to Job’s knowledge of this creature, or that Leviathan is something that has not yet been discovered or has since become extinct.
An Invitation to Christmas
This is one of several Hymns for which I have written both the music and lyric. It is a call to abandon the obscene materialism so often associated with the secular celebrations of Christmas, come to the manger (and in so doing, to the open, loving arms of The Savior), and experience the true joy and actual purpose of the Holiday.
Hallelujah
While serving a local congregation with no formally trained vocalists, I have found myself in need of bare-bones, simpler-than-simple arrangements of traditional or famous works that my choristers would like to perform. This is one such work, an arrangement of the "Hallelujah" from Handel's Messiah. It is greatly simplified with the voices in only two parts, using minimal vocal range, divisi and counterpoint, and a piano/keyboard part that, though also simplified, backs them up with the original contrapuntal entries and continuo.