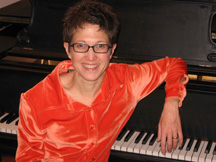 Amelia Kaplan is Associate Professor and head of Theory and Composition at Ball State University, where she teaches composition, theory, and directs the New Music Ensemble. She previously taught at Oberlin Conservatory, the University of Iowa, and Roosevelt University. She completed her A.B. in Physics at Princeton University, and her A.M. and Ph.D. in Music at the University of Chicago as a Century Fellow, where her primary teachers were Shulamit Ran and Ralph Shapey. She worked with Azio Corghi at the Milan Conservatory on a Whiting Fellowship, and received a Diploma of Merit from the Accademia Musicale Chigiana while studying with Franco Donatoni, and a Diploma from the American Conservatory in Fontainebleau. Ms. Kaplan has had residencies at the MacDowell Colony, Ucross Foundation, Atlantic Center for the Arts, and the Virginia Center for the Creative Arts. Her work has been performed at Mise-En, the Thailand International New Music Festival, SICPP, Wellesley Composers Conference, Gaudeamus, Darmstadt, June in Buffalo, and numerous SCI Conferences, among others. In 2013 her work Insolence was a runner up in the Forecast Call for Scores. Recordings can be heard on Albany, NAVONA, Centaur, and ABLAZE. Several double reed works are published by TrevCo Music.

NOTES: INSOLENCE, for violin and piano, is a short work that explores ways of uniting the two instruments in gestural sympathy. I've always found it difficult to write for piano and a traditional solo instrument – the piano simultaneously threatens to overwhelm and to take a secondary role. Insolence is an attempt to find a common meeting ground.
Insidious, for fl, cl, vn, vc, pno and perc
0:00
Written for and recorded by the California E.A.R. Unit. August 9, 2007. Arcosanti, AZ.

NOTES: INSIDIOUS, for Pierrot ensemble, started life with an explicit extramusical program. It was begun in 2006, under enormous time pressure and at a time when I was the recipient of some heinous behavior. In order to channel my frustrations I decided that the piece would be based on a small tune that kept bubbling up after attempts by other musical figures to drown it out. The concert it was originally planned for was cancelled after I had only completed about two minutes, so I put the piece away, unsure if it would ever have a performance, and worked on another piece. After learning of my residency with the California Ear Unit, I decided to resurrect the piece: I greatly shortened the original two-minute beginning, which now appears about 30 seconds into the piece, and it took off in an entirely new direction, with a more positive outlook. The original title may no longer be relevant, but I liked the sound of it, so I decided not to change it – I may at some point. The piece is now more about compromise – drastically different types of musical gestures coexisting, breaking off and reappearing to take up lost threads later on, noise and jagged lines combined with romantic loopy lines, and allusions to real and remembered sounds.
Beat It With a Stick, for 2 percussionists
0:00
Commissioned and performed by DoublePlay: Steven Paysen and Dominic Donato, percussion. October 14, 2006. New York, NY.

NOTES: BEAT IT WITH A STICK was written for Dominic Donato and Stephen Paysen in the spring of 2006. I have always loved writing for percussion as part of an ensemble, and for years have wanted to write an all un-pitched percussion work, but only this past year has the opportunity arisen. Although I have anticipated writing such a piece for a long time, when I actually started, I found it to be a much more difficult project that I had expected – my musical language is completely driven by gesture, but my ideas always begin with pitch. Additionally, I tend to use motives and exploit contour, which also made figuring out how to begin a difficult task. After about 3 months, however, I finally found a way into the sound world, and then everything fell into place. The piece is built out of several motives which get developed to some degree, passed among the instruments, and get used to create larger building blocks which drive the form. The larger building blocks consist of two types: static directionless statements, and multifaceted purpose driven statements. The two types are played off of each other over the course of the work, beginning with short motivic gestures and statements by the two percussionists playing in tandem, and increasing in density and energy to the end of work where two players ultimately part ways, one taking the static road, the other the more dynamic road.
Game Plan, for small chamber orchestra
0:00
Commissioned and performed by the Oberlin Contemporary Music Ensemble, Tim Weiss, conductor March 11, 2005. Finney Hall, Oberlin, OH.

NOTES: One night in June of 2004, as I was drifting off to sleep, I had a sonic "vision" of many instruments playing a specific descending figure, in different tempi, in a continuous cascade over an ostinato, resulting in a thick sound mass. This chunk of music occurs about three fourths through Game Plan – the rest of the piece was composed forwards and backwards from that segment. Although I did not set out to write a funny piece, the materials themselves, fairly banal and comical in isolation, inevitably led me to do so. The idea of juxtaposing musical figures in different speeds is presented at the very beginning and then continues in a unison line in which each beat is divided into a different number of subbeats (essentially different speeds) which leads eventually to entire bars and even longer spans proceeding at different tempi. The motive, which takes turns as a tune and as an accompaniment, turns into an ostinato which repeats ad naseaum. (A simple object can turn into something very different simply by repeating, in essence focusing a lens on its makeup – think of Satie, for example.) The ostinato then culminates in the parent tune piling up on itself, i.e. in the musical vision which precipitated the piece in the first place. Tim Weiss suggested that my original segment sounded like "a game", thus giving me the idea for the title. Indeed the piece is about playing with time. The result is my "Game Plan".